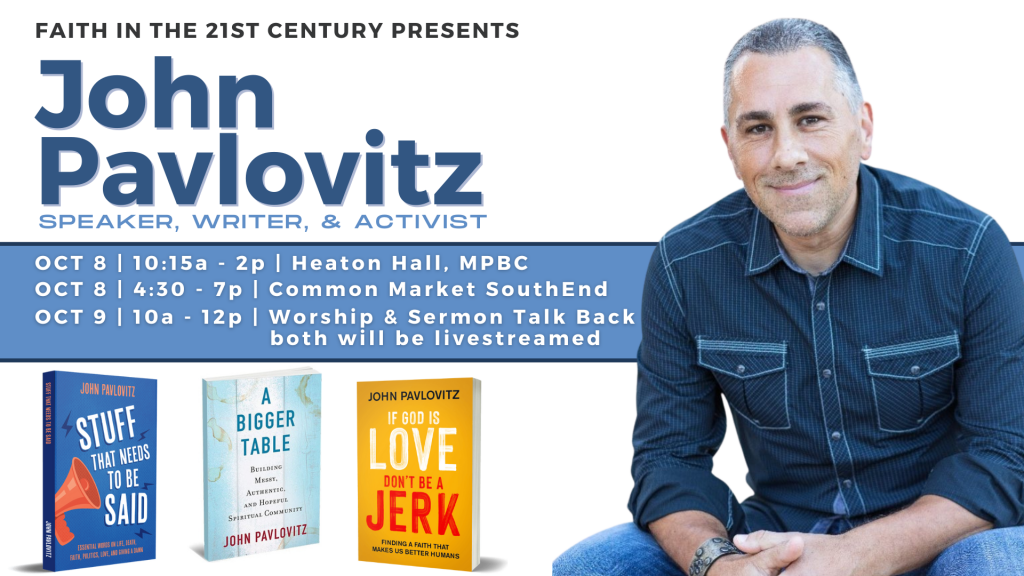 We are excited to welcome John Pavlovitz this fall for our annual Faith in the 21st Century (F21) weekend! Pavlovitz, a native of Winston-Salem, is a much sought-after speaker, writer, & activist who has been committed to equality, diversity, & justice—both inside & outside faith communities.

His spiritual journey has taken him from being a youth pastor at a fundamentalist mega-church to one who proclaims a progressive viewpoint on issues from women’s equality to gender rights to an open & inclusive vision of the Gospels.

In 2017, Pavlovitz started a blog called Stuff That Needs To Be Said. That year alone, the site received 23 million clicks. Since then, he has been featured on CNN & other major outlets, sharing a message that resonates with many progressive Christians, disaffected & ex-Christians, as well as those whose views are not always in the church mainstream.

Pavlovitz professes a strong faith in Jesus and speaks to how these authentic teachings can be applied in practical ways to today’s issues and challenges. He doesn’t shy away from criticizing church practices that he believes are contrary to these authentic teachings. He is the author of A Bigger Table, Hope and Other Superpowers, Low, and Stuff That Needs to Be Said. Mark your calendars and join us for this weekend event that can sharpen and widen our understanding of faith as we rebuild community.